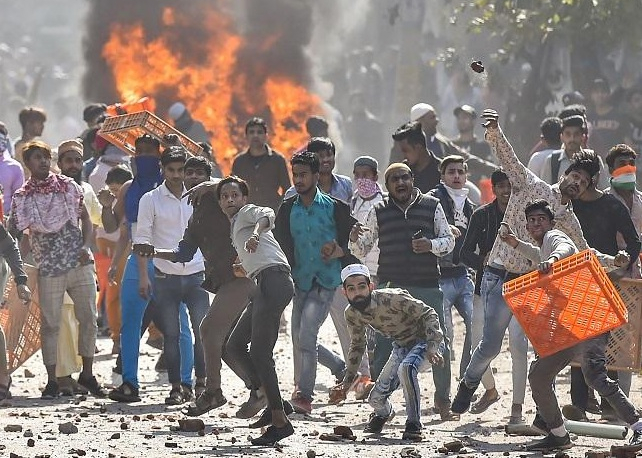 Growing up, I used to think of Saffron — the top band of the Indian national flag — as the colour of strength, of courage. Today, however, it is anything but: today, Delhi is burning with the glowing hatred that saffron has now come to symbolise. Today, I give this space to my dear friend Noumaan Anwer, whose powerful words and poetry seek to capture the colour of this fire from within the mind of its arsonists:

I write this from a national capital currently ravaged by communal riots – where entire enclaves of the city lie tarnished by flames; where sleeplessness and hunger of those pushed to the streets are only increasing; where a wave of unabashed saffron rage is ripping through the fabric of this country more viciously and explicitly than ever before.

Someone once said that every modern genocide in history started with a majority manufacturing the story of its own extermination.

In midst of this bloody pogrom, with uncertainties multiply exponentially, Delhi and India urgently seek answers. Why do the perpetrators feel that such unfettered violence was needed? Where does the justification for the slaughter of innocents come from? Why is this vengeful lust so irrepressible? What makes them push their blades deep into the heart of our country?

Centered around the echoing devastation that surrounds cries of ‘Jai Shri Ram’, the following poem, titled “War Cry”, attempts to address these questions. It tries to tie together justifications for ‘reclamation’ of ‘lost’ territory and supremacy and the disproportionate violence meted by the Saffron terror of the RSS, its members, and its die-hard allies. Looking at communal violence from the perspective of its perpetrators, this piece attempts to detail how emotionally invested the Sangh and its cadres are in this ‘battle’, how divisive ideas and hatred seep through their veins, and how far they will go to ensure that ‘their’ land is cleansed of those they see as outsiders.

The language of this poem, which at times confuses and enrages, attempts to capture the systematic otherisation meted out to Muslims, women, Dalits, people from the North east, Adivasis, dissident students, activists, and journalists, and any other group of people who disagree with the RSS’ message of violent exclusion. War Cry seeks to paint a picture of the sheer ruthlessness that drives those who brandish the blades of violence in Delhi today.

Into the Lord’s ‘brave hearted’ corps,

A suppressed idea to the fore.

Steadfast in our trenches,

Every recollection – a tale of the forgotten, of victimhood,

Of seeds sown for the meek.

What for the fact,

That our blood flows through these toiling plains?

Progeny that fought for this dust,

Sacred pride pumping through their veins.

From a storm of foreign sand.

For how imported thunder crushed fertility,

A collective memory of humiliation,

Yet the fibres of seven decades past –

Embroidered with their salvation.

A hideous affront to the weighing scale,

Of what is pristine and true,

Ridicule of us ‘few’.

Spicing the soil with blasphemy,

Nourishing it with brine.

Their morals are of a cutthroat,

Not a semblance of mercy in their eyes,

Our land reeked of senselessness,

Wholesale murder rained from our skies.

Despair however could parch these fields,

For only stolen stacks of time.

Emptied now, are their lockers of good fortune,

Down came the heavy spectre, on unforgivable crime.

The tendons in our exploding throats,

Came alive, out of comatose oblivion.

Expelled dynasts and their minions.

Its devotees shown the door,

But no respite consumes our troops,

Till nobility bleaches the stinking floor.

From which we forged sabres of gold,

To be wielded against their injustices,

Banish alien-ness from our fold.

This never was, nor shall it be,

Their playing field of anarchy.

An end put to their uniqueness,

Finality in our decree.

And if they cease to set aside

Collective will shall push them over

To the greener side of the fence.

The generals in command today,

Plant triumph in our throats,

To scream out from the wilderness,

By pledging our priceless votes.

For who belongs, and who defiles,

The essence of what it means to be,

Our jury shall determine,

Our fury shows no empathy.

By the scruff of their existence,

Shall they be dragged out from recluse,

For insult to our eternal glory,

Bare-breasted, now, shall they atone,

For shameless interventions in our history.

The power of our convictions,

Shall not afford them amnesty.

And when sinful realization,

Has been thrashed out from within,

They shall join us in our war cry,

Or trace knife blades beneath their chins.

Noumaan Anwer is a student of History at St. Stephen’s College, University of Delhi. He has previously written for The Citizen and for The Indian Express.

The Adventures of Fyo and Ro #1: Summer Vacation

Where Boys Do Household Chores Too

Check out my Tumblr for a daily feed of handpicked art, poetry, music, videos, and essays, and follow @punkrockandreticence on Apple Music and Spotify to listen to my playlists.

Translate To Your Language